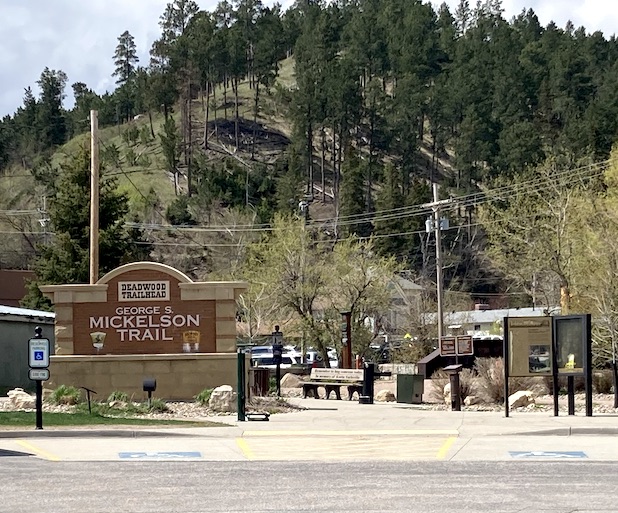 May 23 - 27, 2022
For most of us, the adventure to Hill City, South Dakota started May 18 and took about 3½ days to get to our cabins in Hill City. The purpose of the trip was to conquer the George S. Mickelson Bike Trail from Deadwood, SD to Edgemont, SD ending at mile marker 108.8. The brave souls that took part in the ride were, Terry Ross, Lynn Rivenbark, Bonnie Gehling (trip leader), Ben Thompson, Barry O’Neill, Margaret Clay, Bob O’Neill, and Jo Scott. The Shuttle Bunnies were, Rosemary Ross and Head Bunny, Holly Payne. We were very lucky to have an Administrative Assistant along to help the Bunnies, Susan Bush.
GEORGE S. MICKELSON BIKE TRAIL
South Dakota 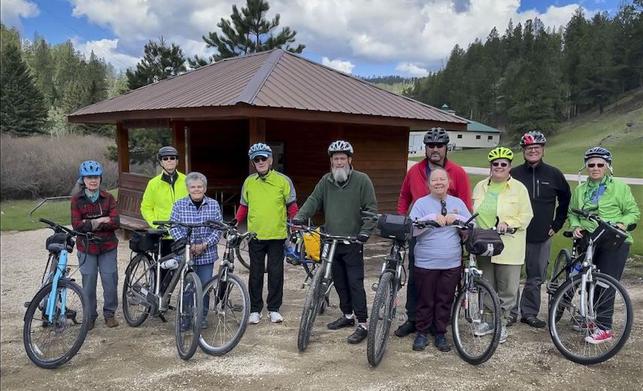 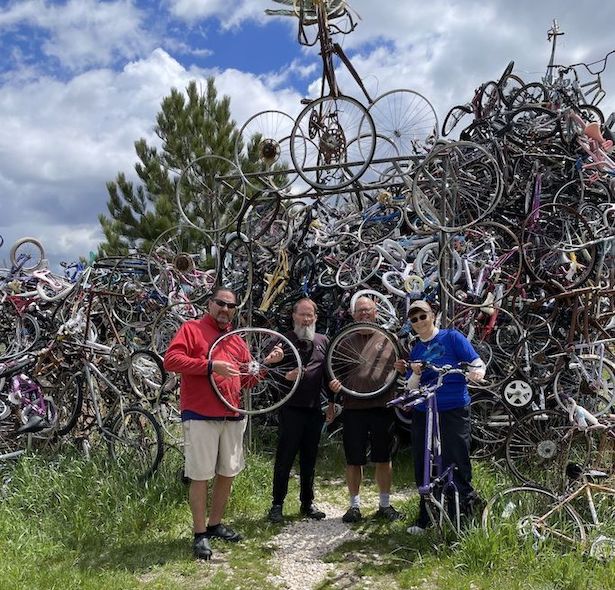 Day One.  We were all pretty stoked about the first day’s ride. All members were warned about the long climb at the beginning of the trail in Deadwood, however, choices were made, options were given, and slaps on the back and hugs were many, for a safe and successful ride. Then the climb began and began and began… I can only imagine that a few naughty words were mumbled along the way up and up. The UP was approximately 15 miles! Who knew?? Well, everyone did, but being proud GWS members, most gave it a good go. Couldn’t be that bad?? If you had an e-bike, it wasn’t, but there just weren’t enough gears on the regular bike to tackle the long climb. Everyone but one eventually did give it a good go! Yippee! Downhill from here! Maybe. Then came the change in weather. The ride started out at a temperature of about 46. It had snowed a few days before we arrived but that did not deter us! However, the temps dropped and a very cold rain started pour-ing down. This was a perfect storm for hypothermia! Two riders finished the first day, and the other five found some warmth at a trailhead cabin. Thank goodness for some heat and a help call to the shuttle bunnies. The five were rescued and eventually, thawed out. That ended day one!
Day Two.  It was a bit nippy at the start. One of our riders tested the laws of gravity between bike and human. The rider (name will not be disclosed) felt it was beneficial to “get it over with!!” As the body and bike were uprighted, we were all in for a wonderful day until we had another seven-mile UPHILL climb! I think that really did it for some, but everyone finished with a flare and great attitude back at Black Hills RV resort, where we were staying. 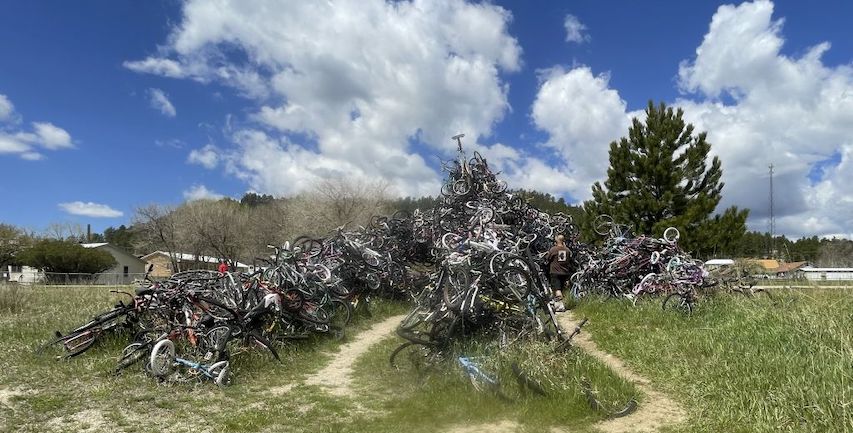 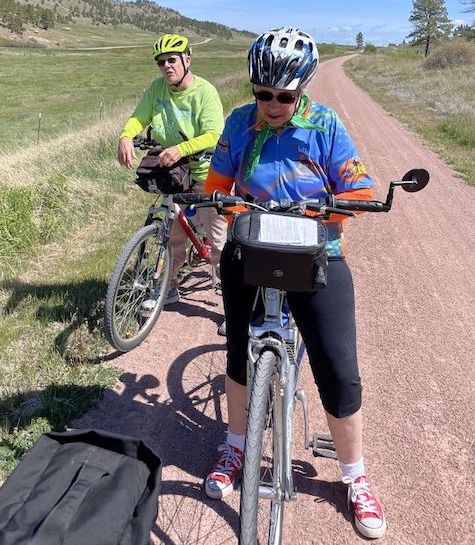 Day Four.  Final day saw the “B” boys head out of camp to go visit Devil’s Tower in MT, then start back to GA. The other five riders had a beautiful ride, all downhill, into Edgemont, our final destination. Most riders finished the trail at 83.2 with a few doing less but nonetheless, we had a great time! 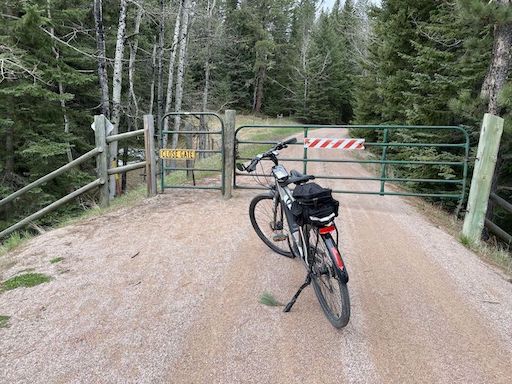 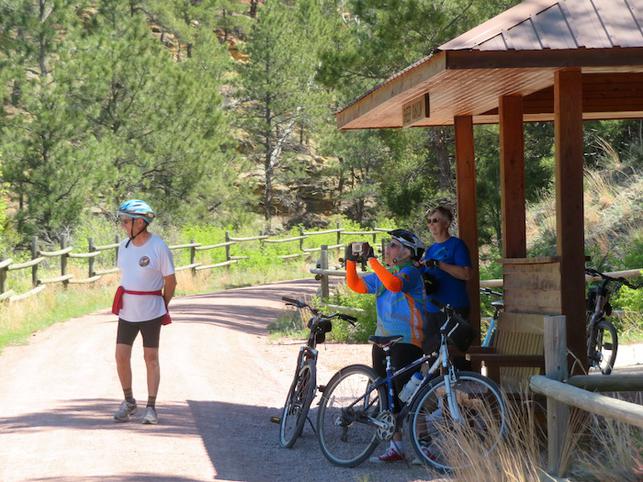 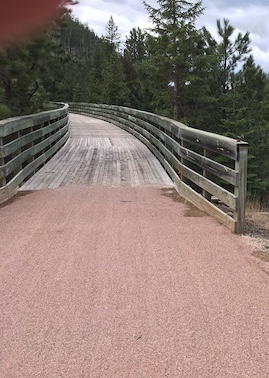 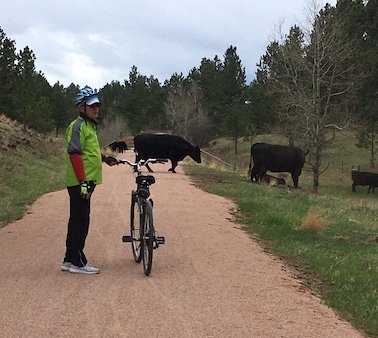 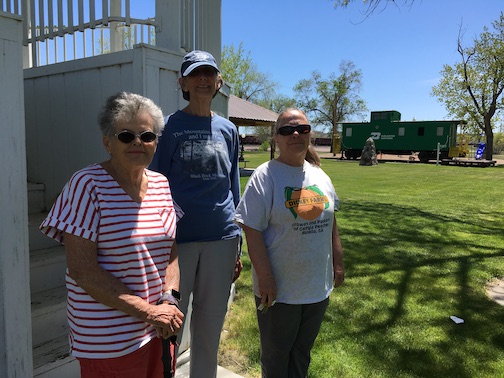 Day Five.  On Friday, the Ross’s headed out to visit friends in Walden, CO and then off to southwestern CO for a couple of weeks. The rest of us used the free day to explore more parts of western SD. The sites seen by most were Mount Rushmore, Crazy Horse Monument, Custer State Park, Deadwood and the slot machines, Wind Cave, Spearfish Canyon Scenic Byway, and the Badlands.
Day Three.  Four people said, “Not today!!!” Hill City is in the beautiful Black Hills of SD. The bike trip was combined with exploring the hills and dales each day. Some stayed around and just rested, some went exploring the beauty around us. The other  remaining four riders decided they did not want to start their day, once again, going uphill, so we went to the trailhead at the top of the mountain. It was a beautiful day and a beautiful ride downhill. Each day gave us new views and beautiful scenery. We were so fortunate to get to experi-ence the back country as well as seeing the beauty from the vehicles. 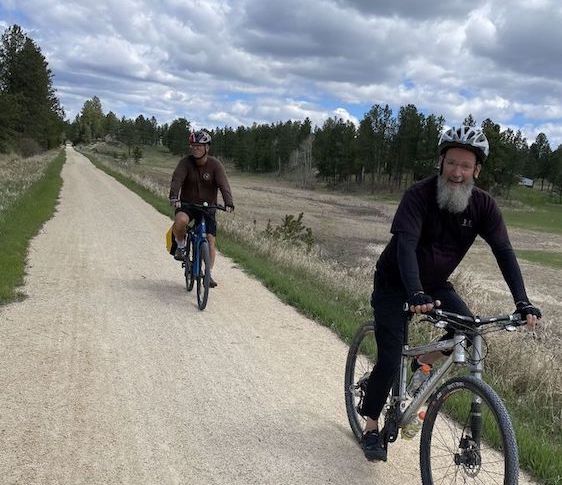 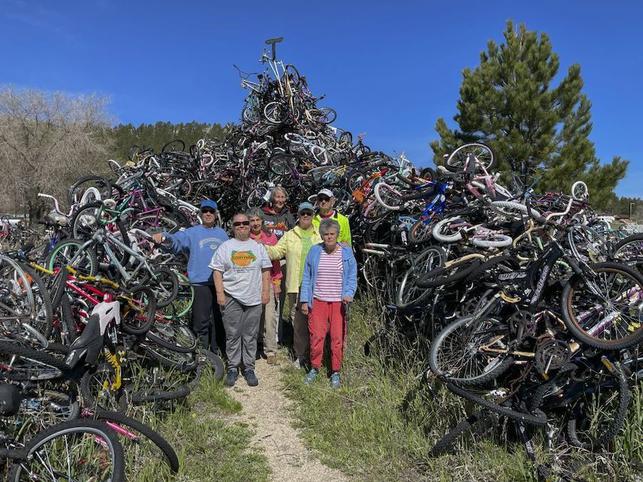 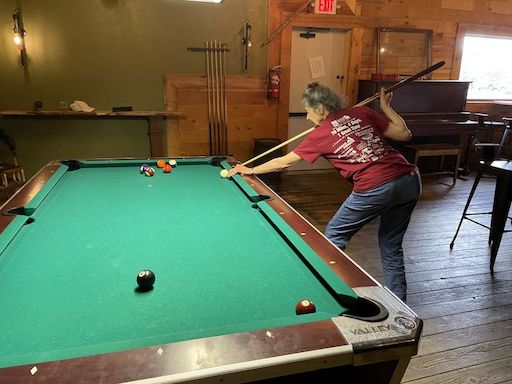 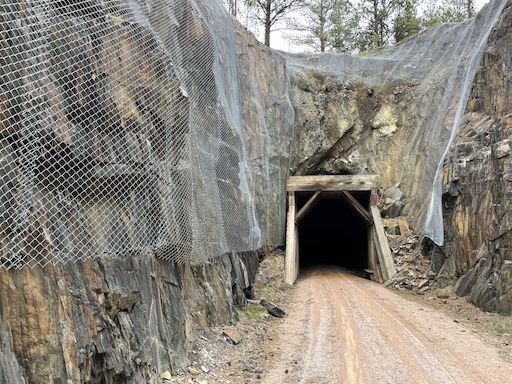 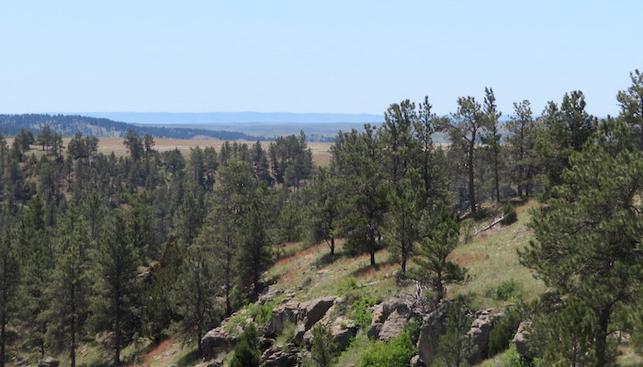 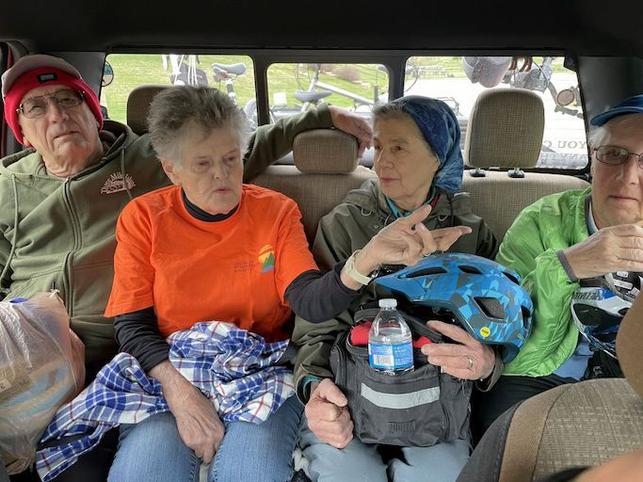 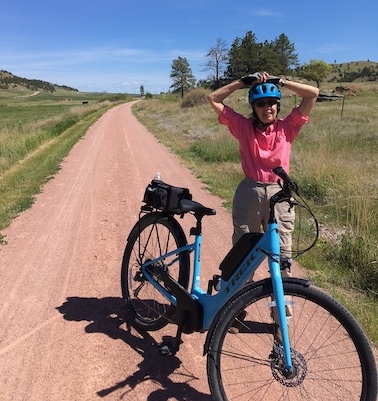 L to R: Jo, Bonnie, Rosemary, Terry, Barry, Bob, Holly, Lynn, Ben, Margaret
Day Six.  Saturday was the final day and the rest of us took off for Georgia.
Needless to say, it was a very successful trip. Successful because of the very loving people in GWS. Everyone arrived safely and got home safely. So, for now, the bison and babies, the prairie dogs, burros, pronghorn, mule deer, white tailed deer and big horn sheep are safe from our cameras and gawking at the beauty of nature!
Bonnie's bike has no clue what to do . . .
Some of the beautiful scenery along the trail.
A bridge on the trail, duh
As Terry ponders what to do, the cows decide they might as well go home after all
One of four tunnels on the trail
Ben (left) and Barry
Bob, Barry, Ben, Bonnie, and Bikes
More beautiful scenery
Margaret just had to check one of her maps. . .
Bikes and babes, and oh yeah, Terry
Back-seat drivers, dang wannabes. . .
Jo "The Shark" Scott
Break time on the last day
What a Wonderful Day!!
The Badlands
Jo Scott arriving at home base
Shuttle bunnies L to R:
Rosemary, Susan, and Holly
THANK YOU !!
Who the heck is this guy   ??