1
Five GWS cyclists and two guests escaped to West Virginia to ride the 77 mile long hall-of-fame Greenbrier River rail trail. Some of us arrived needing surgery; some of us had already endured surgery this summer, but we all showed up ready to ride. Several of the other nine folks who originally signed up to go had a more challenging summer- with heart surgery, medical mystery tours, and other maladies endured.
Cyclists enjoyed three beautiful days completing the entire trail, with mild temps, great scenery, no flats, mechanical l problems or accidents, and a very good riding surface. (Despite critical reviews on the Alltrails website, the trail was suitable for 32mm or wider tires in our dry weather). We caught a commercial shuttle the first day to avoid spending extra hours on the winding mountain roads, but ran fairly easy shuttles the other days. The trail runs almost entirely beside the clear, sometimes calm, sometimes riffling river- so pretty it was hard to keep eyes on the trail. We enjoyed two tunnels, several trestles, numerous trailside cliffs and bluffs, good company and good campfires (one with fresh churned peach ice cream from the O’Neil brothers) Sightings included numerous deer, river fowl, and two bears at off trail locations. Some of visited state parks and nature preserves in the afternoons after the two shorter rides. We stayed at Watoga State Park; its CCC buildings and cabins, and indeed most of the surrounding fields, farms and towns, had a historic look and feel.
After finishing the Greenbrier trail, several riders left to ride the Virginia Creeper trail near Damascus, while Mangum rode 26 miles on the scheduled Jackson River Scenic trail located in the next valley over. It had a smooth cinder surface, and was in fact scenic, with both sheer cliffs and open valleys, and a beautiful river running alongside.
Participants were Bonnie Gehling, Jo Scott, Margaret Clay, Ben Thompson and his guests Barry and Bob O’Neil, and trip leader Joe Mangum. We encourage those who missed this trip to get healthy again, and we will do a repeat.
Georgia Wilderness Society
Greenbriar River and Jackson River
September 2021
Jackson River Scenic Trail 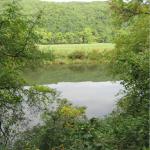 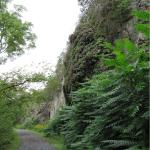 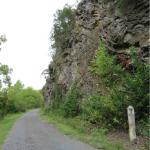 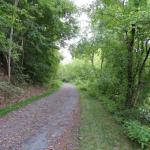 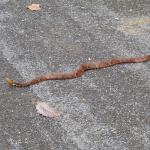 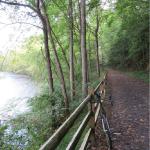 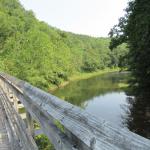 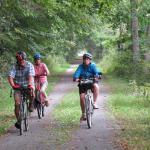 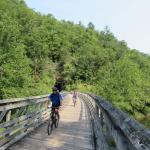 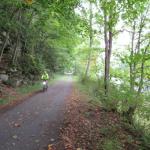 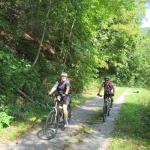 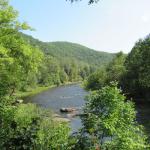 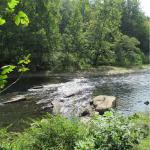 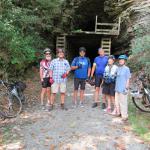 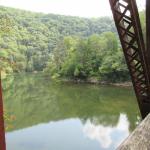 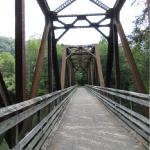 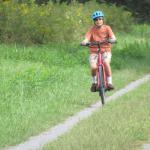 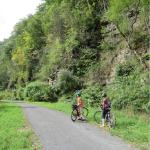 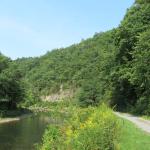